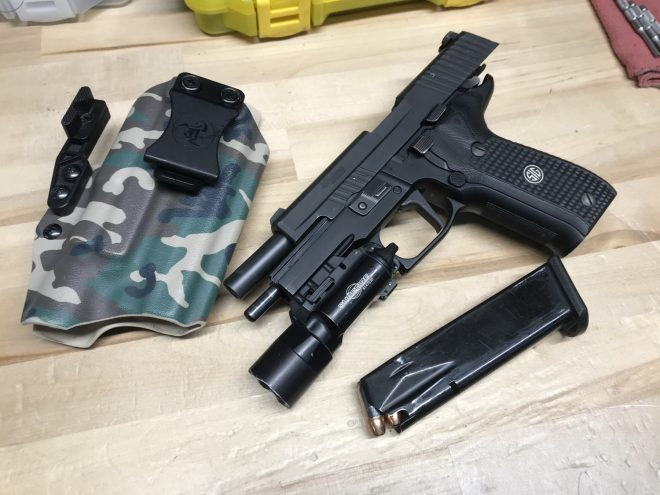 What is Dry Firing?

Dry firing is shooting a firearm without ammunition in the chamber. Here’s what happens. The shooter pulls the trigger. The hammer drops. No shot is fired because there are no bullets.

Do I Need Special Equipment to Dry Fire?

You can buy pistols made especially for dry firing. You might choose to do so because there is a concern that excessive dry firing can cause a firing pin or striker to break. However, if you use snap caps this should not be an issue. Really, most modern firearms are sturdy enough to withstand thousands of dry fire cycles.

What are the Benefits of Dry Firing?

Many gun owners will argue about whether dry firing is beneficial to the shooter. However, research has shown that there are a number of things that can be improved from dry firing.

Live fire practice can be very costly when you factor in ammunition and range fees. Even if you own land where you can safely set up your own private range, you still have ammunition costs.

If you truly want to improve your shooting skills without investing a ton of money, dry firing is an excellent option. Some marksmen have gotten very good by solely dry firing.

In some countries, live firing isn’t legal. Dry firing is the only option for training.

Check out this video to see how regular practice dry firing can be very effective for those who wish to every day concealed carry. Click on: https://www.youtube.com/watch?v=PUadUOC7FJk

Starting with dry firing, you can practice smooth drawing, aiming, staging the trigger and transition to live firing handguns, pistols, and rifles.

You can dry fire at home. The only cost is your dry fire pistols

Why are People Opposed to Dry Firing?

Some shooters argue against dry firing. They contend that it is an artificial situation.

The biggest reason for people not dry firing is the risk of damaging your handgun by dry firing without ammunition in the chamber.

Anti-dry fire people contend that dry firing causes internal damage to the gun. If you use simple snap caps, you can dry fire without damaging the striker or the operating system of your concealed carry.

Another reason given is that there might be a negligent discharge when you pull the trigger. If you practice the basic rules of firearm safety, this would never occur. A cardinal rule is to know the condition of your gun all the time.

Start with one facet. Don’t try to do everything at once. Focus on something like drawing. When that becomes second nature, add another basic skill.

Once you are able to draw from a concealment holster, add a skills such as reloading the magazine. Get proficient before you move on to another skill

Once draw, aim, and fire are mastered, work on trigger press.

Buy some snap caps. Load multiple rounds into each magazine. This saves time with set up.

When you have become proficient with drawing and firing successfully, try practicing magazine changes from your pocket or mag carrier. Eventually, you will be able to incorporate all the various skills and dry fire with confidence.