While our online training program may not allow you to apply for Hawaii’s permit/license to carry, nonresidents of Hawaii can utilize our online training program to apply for a New Hampshire Nonresident Carry Permit/License to ADD to the number of states they can carry in than with Hawaii’s permit alone. This course may also assist residents in getting the Hawaii Permit.

Hawaii does NOT recognize the New Hampshire Nonresident Carry Permit/License as a legal way to concealed carry in their state. This course may however, assist you in gaining your Hawaii State Permit.

Also, by getting the State of New Hampshire’s Nonresident Carry Permit/License, you can INCREASE the number of states you CAN carry in.

Read below to view the most recent laws, regulations and guidelines regarding Hawaii’s Concealed Carry Laws As Of 2020*

Yes. You will NOT be applying for your permit in Hawaii. This is for you to obtain a New Hampshire Nonresident Carry Permit/License which is accepted in many states as a valid concealed carry permit, but NOT in Hawaii. This is valid reciprocity with other states for Hawaii residents and nonresidents.

How Long is the New Hampshire Nonresident Carry Permit/License Valid?

New Hampshire Nonresident Carry Permits/Licenses are valid for 5 years. We suggest you apply at least 90 days before the expiration of your permit to be sure you have plenty of time to submit it to the New Hampshire State Police to be renewed to allow enough time for you to get your new permit before the old one expires.

*Laws and outlines are updated to the best of our ability. 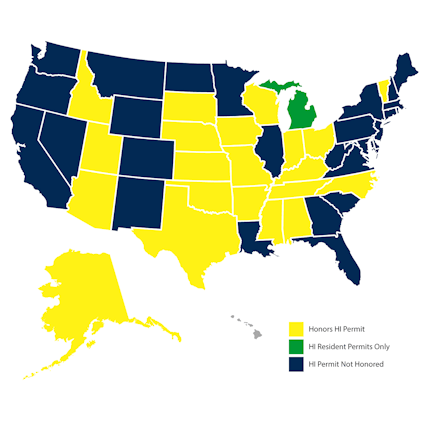 The State of Hawaii does not honor any permits or licenses.

Applying for a Permit in Hawaii

Applying for a permit in the State of Hawaii is closely tied to the 9th Circuit court decision Christopher Baker v. Louis Kealoha, Police Chief of Honolulu.

Laws and statutes within the state have been continuously ruled to not impede the rights awarded by the second amendment.

Hawaii remains a may issue state until there are further rulings.

In order to apply for a permit applicants must fill out forms found at the following links. Note, a permit has not been granted for many years.

In order to apply for a permit you must contact the chief of police in your county of residence, the permit is only valid for one year, is only good for the county where it is issued, stipulations can be put on the permits, costs will vary for the permit.

(b) The chief of police of each county shall adopt procedures to require that any person granted a license to carry a concealed weapon on the person shall:

(1) Be qualified to use the firearm in a safe manner;
(2) Appear to be a suitable person to be so licensed;
(3) Not be prohibited under section 134-7 from the ownership or possession of a firearm; and
(4) Not have been adjudged insane or not appear to be mentally deranged.

§134-3 Registration, Mandatory, Exceptions. (a) Every person arriving in the State who brings or by any other manner causes to be brought into the State a firearm of any description, whether usable or unusable, serviceable or unserviceable, modern or antique, shall register the firearm within three days after arrival of the person or of the firearm, whichever arrives later, with the chief of police of the county of the person’s place of business or, if there is no place of business, the person’s residence or, if there is neither a place of business nor residence, the person’s place of sojourn. A nonresident alien may bring firearms not otherwise prohibited by law into the State for a continuous period not to exceed ninety days; provided that the person meets the registration requirement of this section

Warning – Before taking a firearm to Hawaii you must read all the appropriate codes and requirements including those requirements for fingerprinting and any potential fees.

In the last 15 years, no law abiding citizen applying for a permit to carry a concealed firearm in Honolulu has been granted one. Not one domestic violence victim, not one person whose life was in danger, not one person working where they may be robbed at gunpoint. And the police chief has no plans to change that under Hawaii’s current law, which says the police department’s highest officer “may issue” a concealed carry permit should he choose to do so. That’s according to Honolulu Police Department Captain Raymond Ancheta, who testified at the Senate Intergovernmental Affairs Committee hearing Tuesday, Feb. 14, 2006, in opposition to SB 2531, which changes Hawaii’s law to read “shall issue” and become the nation’s 39th state to allow concealed carry of a firearm. (The law did not pass.) A spokesman for the Hawaii AG stated that one permit had been issued in Kauai in 2013. Hawaii Permits are only valid in the county they are issued in. Each major island is a county. Hawaii has an issue law on the books but no one knows of any permits issued. From what I can find out PI’s may be able to carry and the local police who issue such permits may be able to put any restrictions on them they wish.

Applying for a Non-Resident Permit

The same rules apply for non-residents as residents.

There are no specific limitations on where carrying is allowed in Hawaii. There are limitations on how firearms can be transported, however, so check the local laws to ensure you are in compliance.

In the State of Hawaii, gun signs have the force of law.

(1) A person commits the offense of criminal trespass in the second degree if: (a) The person knowingly enters or remains unlawfully in or upon premises that are enclosed in a manner designed to exclude intruders or are fenced; www.handgunlaw.us 4 (b) The person enters or remains unlawfully in or upon commercial premises after a reasonable warning or request to leave by the owner or lessee of the commercial premises, the owner’s or lessee’s authorized agent, or a police officer; provided that this paragraph shall not apply to any conduct or activity subject to regulation by the National Labor Relations Act.

Carry Restrictions for State, National and other Public Land

Carrying is permitted in road side rest areas but you may not enter any buildings on the rest area while carrying.

Traveling in a Vehicle with a Firearm without a Hawaii Permit

A permit is required every time you carry a loaded firearm within a vehicle.

It is illegal to carry openly in the State of Hawaii.

§46-1.5 General Powers and Limitation of the Counties.

(13) Each county shall have the power to enact ordinances deemed necessary to protect health, life, and property, and to preserve the order and security of the county and its inhabitants on any subject or matter not inconsistent with, or tending to defeat, the intent of any state statute, provided also that the statute does not disclose an express or implied intent that the statute shall be exclusive or uniform throughout the State.

Hawaii Laws for Use of Deadly Force

Deadly force laws are outlined in the following statutes found in chapter 703 under General Principles and Justification.

State knife laws are not included in the permit statutes.

Laws for Carrying Where Alcohol is Served

It is permitted in the State of Hawaii to carry with a permit in establishments that serve alcohol.

High capacity magazine restrictions: “The manufacture, possession, sale, barter, trade, gift, transfer, or acquisition of detachable ammunition magazines with a capacity in excess of ten rounds which are designed for or capable of use with a pistol is prohibited.” Haw. Rev. Stat. § 134-8(c).

Defensive chemical sprays are permitted for people 18 years of age and over but only those that can be sold legally and there are licensing and size limitations.

LEOSA links for the State of Hawaii

No specific cases were available for reference.

There are no specific laws available regarding airport carrying.

There were no time periods for training specified.

There are no residency requirements, applicants must be US citizens.

Permit requires that you be at least 21 years old.

Permit information is not public.

There are no specific laws regarding body armor.

Permits only apply to firearms per HRS 134-9

It is not permitted to carry concealed while hunting. Only the hunting weapon is permitted per HI Dept. of Land and Nat Resources Rules Title 13 Chapter 123-22.

§134-1 Definitions. “Firearm loaded with ammunition” and “loaded firearm” means a firearm with ammunition present within the firing chamber, revolving cylinder, or within a magazine which is inserted in a firearm.

§134-7.2 Prohibition Against Seizure of Firearms or Ammunition During Emergency or Disaster; Suspension of Permit or License.

(a) Notwithstanding any provision of chapter 128 or any other law to the contrary, no person or government entity shall seize or confiscate, under any civil defense, emergency, or disaster relief powers or functions conferred, or during any civil defense emergency period, as defined in section 128-2, or during any time of national emergency or crisis, as defined in section 134-34, any firearm or ammunition from any individual who is lawfully permitted to carry or possess the firearm or ammunition under part I of this chapter and who carries, possesses, or uses the firearm or ammunition in a lawful manner and in accordance with the criminal laws of this State.

(b) Notwithstanding any provision of chapter 128 or any other law to the contrary, no person or government entity shall suspend, revoke, or limit, under any civil defense, emergency, or disaster relief powers or functions conferred, any lawfully acquired and maintained permit or license obtained under and in accordance with part I of this chapter.

(c) For purposes of this section, “government entity” means any unit of government in this State, including the State and any county or combination of counties, department, agency, institution, board, commission, district, council, bureau, office, governing authority, or other instrumentality of state or county government, or corporation or other establishment owned, operated, or managed by or on behalf of this State or any county.

The State of Hawaii requires that you be 21 years of age to possess a firearm. This is defined in Statute §134-2 which also highlights the registration requirements.

21 years of age is the minimum age for both owning, having in your possession and transporting the firearm. Hawaii requires that all firearms be registered.

If you are traveling in a different county, state or region check local laws to ensure you are in compliance.