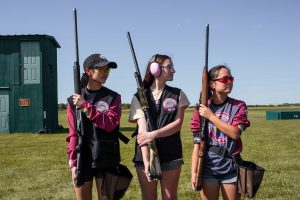 In trap shooting, a machine called a trap launches a clay target, or “pigeon,” into the air. Each shooting competitor takes a hundred shots at these pigeons.

At a Minnesota high school, trap-shooting has become a competitive championship sport.

In fact, this school is not an exception. Over 8,000 students at 300 schools entered the trap shooting competition.

Sponsors include the U.S. Army, and Friends of the NRA.

The Minnesota State High School Clay Target League championship is actually the largest shooting sports event in the world. It’s as popular with youth as NASCAR and Comi-Con.

More and more schools have shooting clubs. There is an increase of over 130%. Over 22,000 students formed over 800 teams in twenty states for competive  shooting.

What’s the appeal? Is it a knee-jerk reaction to mass shootings? Certainly there is some reaction to challenging realities: guns in America and adolescence.

The NRA has funded shooting competitions for the past five years. They have provided over $4 million in cash and equipment grants to schools to support scholastic sports shooting.

At the same time, the NRA is emphasizing and making available courses on gun safety and handgun training.

In both cases, the NRA is supporting their belief that firearm ownership is a right and a privilege.

Propagation of gun use isn’t the only focus for the NRA. They are trying to combat such bad press as the fact that one of the mass shooters in Florida  was a member of his high school rifle team.

There is nothing wrong or unhealthy about marksmanship or shooting competitions. Critics have argued that schools should be safe havens of learning—not places where kids learn to be mass shooters.

There’s no research that proves joining a shooting team makes you more likely to use a gun for harm. In fact: some psychological evidence shows that shooting teams might well alleviate gun violence.

Those who have taken part in adolescent shooting teams say there is a sense of camaraderie they found nowhere else. They also noted competition improved their confidence and focus.

Competitive shooting is an individual sport, like wrestling. But, it’s also an opportunity to bond with those of similar interest. Besides team building competitive shooting builds hand-eye coordination and physical conditioning.

Anyone of any size with any other academic or athletic skills—or not—can become a marksman.

Students don’t shoot or compete on school property. Nor do they bring their guns to school.

The sport is coed. Twenty percent—and growing—are girls. There is no expense to the  school budget.

There is no safety issue to competitive shooting. In fact to date over 80,000 students have fired 50 million shots without a single injury. What other sport can boast such a safety record?

Before they compete, every student must pass a firearm–safety certification test.

The politics of guns are always at issue in every shooting competition. Some of the students who compete are decidedly anti-gun. They do not see the two as opposed.

These competitive shooters do not see tighter gun–control laws as a solution fr mass shootings. Instead, they advocate for better gun safety and  psychological help for struggling youth and adults.

Trap shooters understand that not everyone shares their perspective. Sadly some students and adults believe that if a kid is on the shooting team, he might shoot up the school or the community.