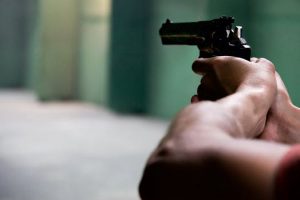 One of the hardest things for shooters to address is how to control the recoil of their gun when shooting. Recoil is a movement backwards, usually from some force or impact. The recoil of a gun is a backward movement caused by the momentum of shooting a bullet from the gun. It is a physical effect that you feel in your body, particularly in your shoulder or wrist.

Many shooters can learn to control gun recoil using these five techniques.

Hold Your Handgun High on the Grip

Hold your handgun high up the grip.  Make sure that the pistol’s moving parts can still function without your hand in the way. The closer your hand is to the bore axis, the less torque your firearm can generate, and the recoil will feel like a push instead of a wrist snap.

Your stance should be a forward lean, similar to athletic stances, which helps take up and absorb some of the recoil. The firing side foot is slightly behind the support side foot. The belly button, nose, and toes are all indexed forward towards the target.

Most shooters flinch in anticipation of the recoil, flash and report of the shot, which can cause them to tense up and pull right or left. To get better trigger control, align your gun with the target and squeeze the trigger slowly by curling the trigger finger back toward the thumb. Concentrate on aiming the gun at the target and slowly squeezing the trigger.

Train your mind to want to make the gunfire and cycle so that you are prepared for what it will do.  Get out of the mindset of fearing that it’ll hurt or be uncomfortable. That actually helps your mind deal with recoil.

Change the gun’s grips to larger grips that are comfortable and allow you to manipulate the controls. This helps spread the recoil energy over a larger part of your hand and takes the sting out of recoil.

When you master the recoil of your gun, you’ll enjoy shooting more.  You’ll get better performance and efficiency should you ever need to defend your life.